An old (2006) implementation of the logic game Kye playing the original 15 levels for Linux & Windows. It gives an unique look and feel with a little different probably more intuitive mechanic while still giving the same old game with all of it's components. Source code is included. Requires at least a Pentium 200MHz machine for decent performance. 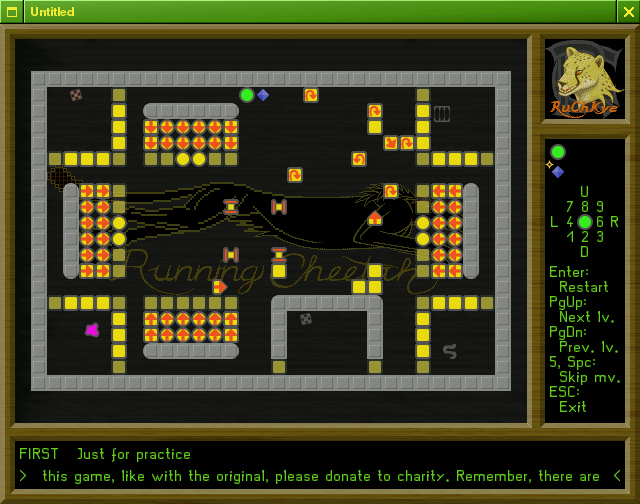 What is Kye? It is a small logic game written by Colin Garbutt back in 1992 for the pre-95 Windows-es. It was a "charityware" game that you would have to donate for a charity organization to get the complete. The game itself is an unique logic game where you moving the green dot have to collect the blue diamonds while avoiding all the obstacles and traps set by the many types of interactive objects: the uniqueness lies in these objects and the multitude of ways they could affect your quest.

This game somewhat faithfully reproduces the original fifteen levels of the 1992 game with some minor changes to adapt them to the different behavior of my implementation's game mechanic. The most important change is contrary to the original the objects move smooth which also sometimes drastically changes the way they behave compared to it. However contrary to some other implementations I had seen, mine correctly implements diagonal movements even when only using the four cursor keys (So you not necessarily have to have a numeric pad to solve certain areas needing the diagonal movements).

When I programmed the game I "ran" that one-man software company "Running Cheetah Software". Originally the game had a worse logo image of that, I replaced this to the latest one, but other than that and a few changes to the scroll-text it is faithful to that.

The game binary given here contains everything you need to play, yes, it's just that little. It should run under any decent Linux distribution (It practically only needs SDL). I also grant you access to the source under the terms of the General Public License, do whatever you want with it ;) To compile just type "make", it's all in it's single makefile.

The Windows version is distributed with a suitable copy of SDL.dll. If you have SDL properly installed (As a part of some other cross platform game), you might not even need that file. It should work on anything above and including Windows 95.

A really nice version of the game Kye. I'd say the main feature that makes it unique is the smooth graphics/movement when compared to the original games. It contains no new levels (they are taken from the original 2.0 version), but has some new gameplay elements, most notably, rockies sliding on Kye and diamonds, as well as only 1 life per level instead of the original's four. I'd recommend to the fans of the original Kye to check this out because its definately something new that's worth trying out. :)