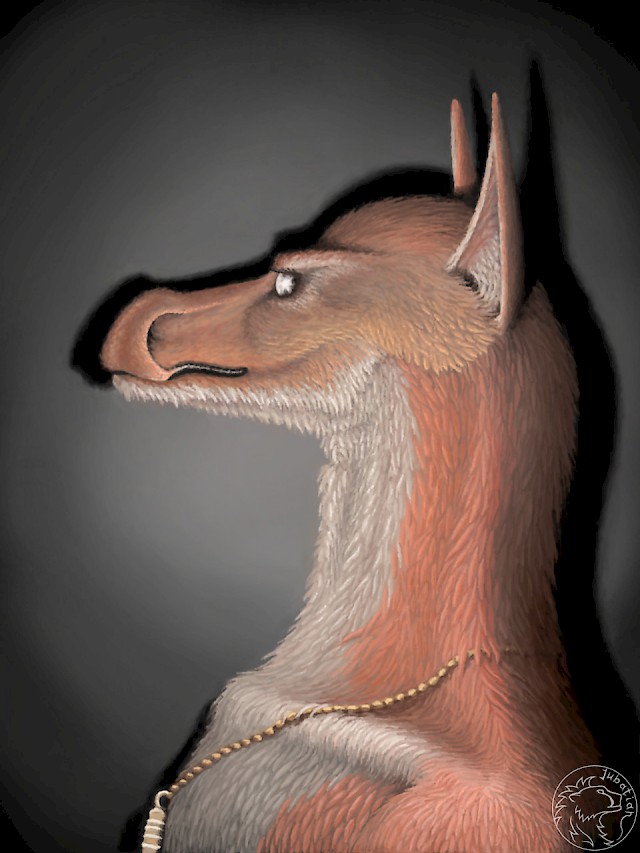 Just some experiments with skull anatomy, fur texturing and such, and to make it simple, I tried a light source like if he was photographed with a flash, in front of a bland background.

The Shiriat with his Cyat companion forms an intelligent civilization on his home planet, technology-wise at a level comparable to human in 1950 or so, but also utilizing inventions human did not even discover yet.

Their economy is sustainable, standing since several hundred thousand years without any mayor change. The most notable feature of it is the lack of road vehicles as they use trams and trains for mass transit, and the Cyat for all their individual transportation needs.

Their society could be called a form of socialism. They have no private property, or only very little, they typically don't even have own homes. They however have shares in the commune they work in, and typically one commune (mostly factory) owns at least one whole city. There are no states or countries, the largest unit of immediate cooperation is the commune. They may travel freely and join a commune wherever they like, however it' takes time and hard work to earn their respect there.

They do not know clothing, their fur mostly protects them, and in areas too harsh, they prefer building up their cities in such a way they can walk freely than covering their bodies. They however use jewellery which is also a symbol of status among them. They get these as prizes in various tournaments, from their commune for their work, overall in cases when they earn some grand respect. It is common knowledge what each piece of these tokens symbolize and which organization they belong to.

Shiriat and Cyat live a long life compared to human, it is not uncommon that elders pass four hundred Earth years. However their life is slow, one of them although reaches his full height in at about thirty years of age, they are considered adult only at around a hundred years of age. This is also the age to which they typically find mate and team up with a Cyat if they were capable enough.

Young Shiriat and Cyat have no mane (like on this portrait), it starts to grow at near two hundred years of age. The mane is so a symbol of age, more so as it tends to slowly get longer and more dense as they age. The elders usually decorate themselves with their acquired jewellery, walking around in this form they look somewhat like Indian chiefs. Elder Cyats also follow this tradition, usually being fitted by their Shiriat mate, but only with their own tokens.

The ornaments of an elder do not only show status, they also show that the wearer can deal with matters the symbols belong to. It is a shame among them to have a particular token which they can not relate.

Long talk, maybe next time I will try to portray an elder to make this not just talk!