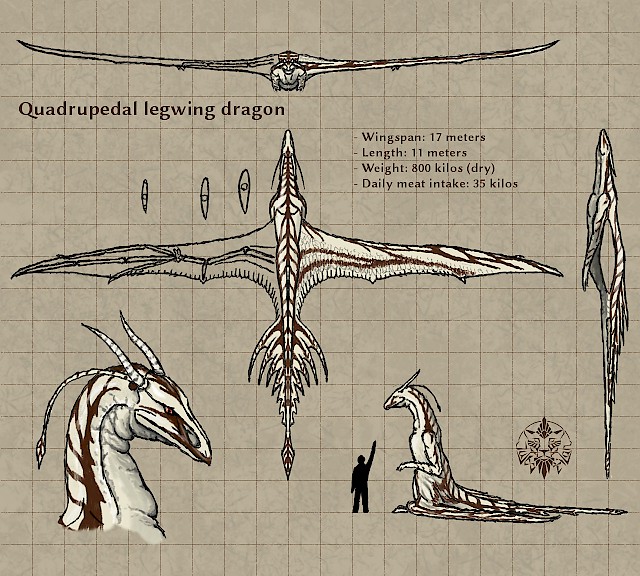 A quite unusual flying creature concept, themed to have a resemblance to dragons. It is roughly based on the idea represented by the Sharovipteryx miribilis, exploring the concept further into developing an ultimate soaring creature.

It is not a first, I actually tried this idea before as a quick doodle with a cheetah like being, but in that, I didn't yet realize how I could push the idea to its fullest potential, creating an aerodynamically sound soaring beast.

The notable development compared to my older article about this, that is how to make big dragon-like beasts airworthy is that here I considered the optimal airfoil for a sailplane, and designed around that, and also that by the legwing concept, I was capable to get a much more suited center of mass for flight (although the wyvern concept is also passable, as the Dimorphodon demonstrated it, although a quite small creature).

The most notable property of the optimal airfoil is that it is thickest at around one third distance from the leading edge, which is also the property which gets the most in the way when trying to adapt it on a biological creature, evolving wings from the arms. It is simply not really possible to get it entirely right. Known flying constructs (birds, bats, pterosaurs) use a propatagium (small excess wing surface on the leading edge before the arm, extended between the shoulder and the wrist or the pteroid with pterosaurs) to make their airfoil more optimal. The limitation is that their center of mass leans to be behind the shoulders, severely limiting how much they can shift their wing surface forth in this manner without tipping themselves over: it is impossible to perform soaring flight with the center of mass behind the axis of the load bearing surfaces as the creature would pitch up into a stall.

With the legwing there is room to expand the wing surface both ways. Anchoring the flight muscles may be possible to a reptile hip with an ischium and pubis bone, assuming them evolving into a suitable keel.

I also added air sacs to complement their wing shape for the greatest efficiency, something speculated to be had by some pterosaurs to more or less extent. On the sitting creature on the image, these are deflated, thus the wing just hangs limply in folds on the leg, and the elongated toes resting by the sides (note that the hip joint is about a meter above ground due to the anatomical constraints: he practically sits on the lump of his flight muscles, the bottom of the keel touching the ground on the front, and in the back, supported by the sturdy base of the tail).

Why this construct isn't present is likely that this creature would be very encumbered until becoming capable to fly well, unlike those which built up their wings from the arm. So they would neither be able to hunt too well, neither to flee too well from threats, or in environments where these aren't necessary, they might have no reason to evolve flight. It is a very unlikely path to take.

Once they fly, their balance could probably permit them to be more efficient than other flying constructs, as long as they can also evolve their ways to interact with the ground if needed, particularly hunting. They probably could also grow potentially way larger than even the largest known flying dinosaur, the Quetzalcoatlus since they can develop a more optimal wing shape.

I imagine these particular dragon shaped beasts to prefer to hunt on more or less open plains, swooping down, grabbing and picking up helpless animals who they might devour in the air.

The possibility of them having true hands, and how they have an upper torso free of encumbrance in the air gives some interesting possibilities (such as in a medieval fantasy they could be aerial archers all by themselves, equivalents of centaurs), impossible with other more or less plausible flying designs.