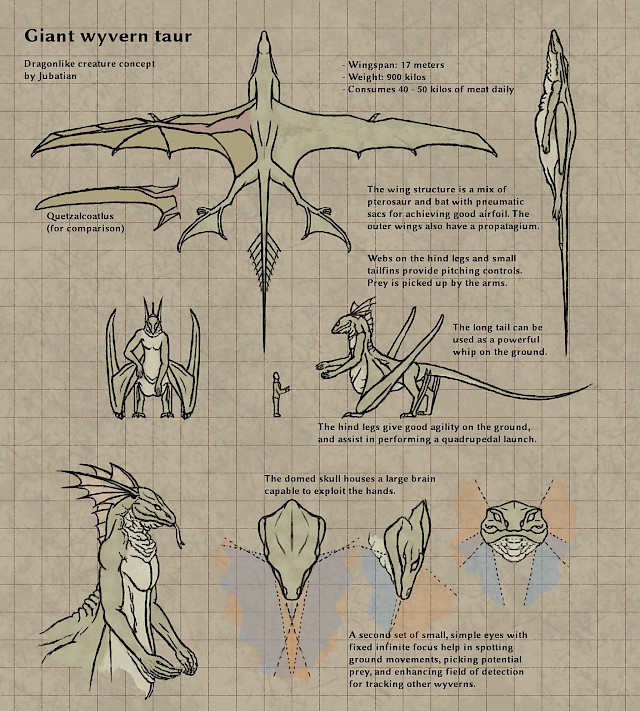 Yet another rather eccentric dragonlike, the wyvern taur. As usual, I tried to build him up so it is reasonably plausible that he could stay up in the air without making physics and anatomy curling up in a corner weeping.

For the aerial part, mostly pterosaur was used as a reference, particularly this site seems to have very good material on the subject (and this one is also very good). Otherwise I borrowed some from the Tani Akri wyvern.

To construct the upper torso, I used giraffe as a reference, particularly the skeletal and muscular anatomy holding up their neck. That's the reason for the notable hump on the back. I imagine the torso having own lungs and a partially independent circulation to provide the head with fresh oxygen-rich blood, but otherwise the lower half is rather a neck than an abdomen. There are no internal organs there, those are contained by the quadrupedal wyvern body.

Why four eyes? I was just experimenting whether it could be made useful. It is not easy to lay out excess eyes in a sane manner, retaining a functional skull. Maybe another set could be added to enhance perception of depth by the main eyes, but that could require more complex ones which may not have room to fit. Those I added I imagine to be simple, from the perspective of him, only conveying sense of motion, vague shapes and directions. Placed there they necessarily have lids, so they can be protected when he is feeding.

This was just some random experimenting, I won't likely use him anywhere, being rather content with my four limbed designs such as the Legwing dragon. This anatomy would pretty much assume intelligence, combined with the capability of flight these would be very much dominant creatures of their ecosystem.