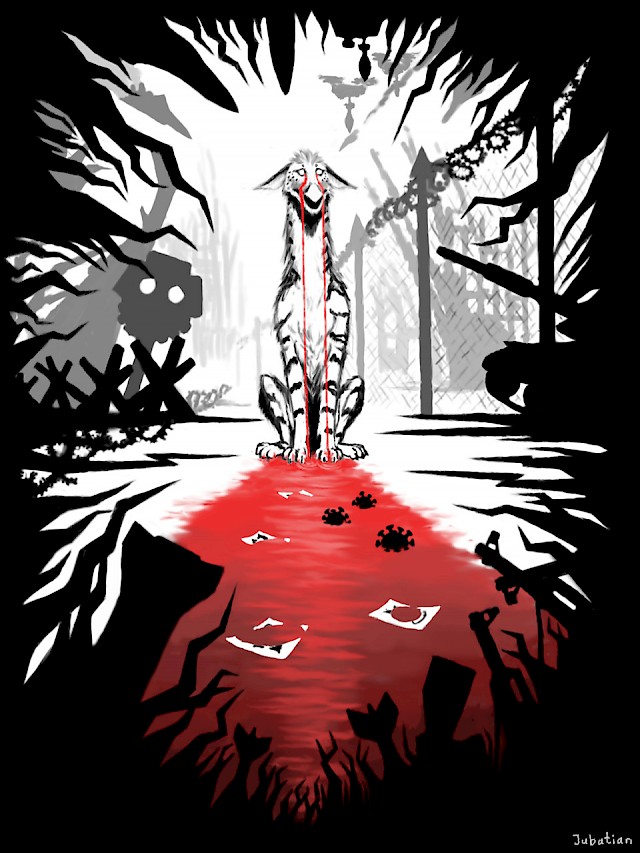 This is a reflection of the year passing (painted on the last day of 2022), depicting my Kyokka character in the middle of it all. The pandemic just passing, only to give way for that total madness onset with the 24th February. Also reflecting the darker parts of my personal life, leaving behind those disturbing controversial connections I had the misfortune to tangle up with during the pandemic.

Really, this was a shocking year, more so than 2020, locking us all in.

Even though it barely affected us (in the United Kingdom) in our everyday lives apart from a few things becoming somewhat more expensive.

It is horrible, and something probably most of us couldn't imagine to ever come again since World War II. It is horrible to face it, to see that there are still so many who see this justifiable. Ukraine, the Ukrainian people are now fighting for the right to be free, everyone's right, not only their own nation's. It is a miracle, it is inspiring how they keep going, and despite all the pressure, maintaining their integrity, not going down to the lows of that brutal power they are fighting against.

It isn't all black and white however. I myself am coming from a country (Hungary) which, well, is quite on track repeating its terrible choices in the wars of the past. There is a minority in these countries (Russia included) who are just as much appalled by what is happening, what the majority of their own country is supporting.

They are powerless to do anything. They are. It is easy to say they could do something from the comforts of a country where things are going reasonably all right. You can't piss against a hurricane. Well, you can. All you get is your face full of pee. Nationality sometimes is simply a modern incarnation of slavery. They can do whatever they want with you.

Hope still lives on. Ukraine's spirit is strong. They shall triumph (hopefully with as much help from the free world as possible to be given them), and this shall be over.

Hopefully the oncoming 2023 will be a better year than what we are leaving behind!