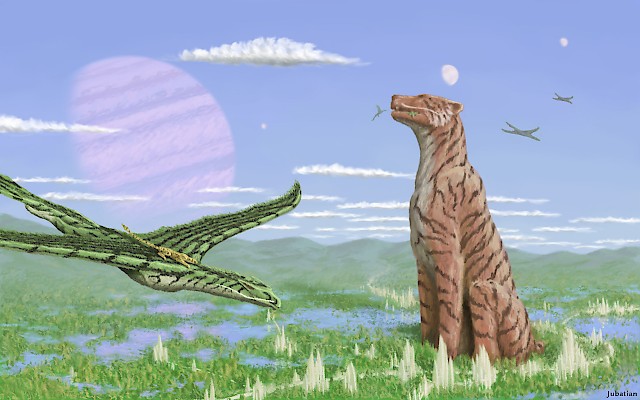 Probably one of the most condensed scenery possible on the cheetaan homeworld before the wars. A huge gas-giant, exomoons, a gargantuan creature resembling a tiger, a cheetah riding a feathered wyvern over crystalline buildings scattered in a swamp, anything missing?

Technique-wise this was the fastest larger image I completed, taking only about ten hours. Nothing overly detailed, smudging and messing around with brushes to create an illusion of foliage and fur or feathers, for the appearance it looks just as good previous such large pieces from me. The cheetaan, especially the dragons (Tani Akri) come from older artworks: Cheetaan City (for the general concept, note how the planets and their appearance on the sky was fixed here), Tani Akri (dragon) reference sheet, and Tani Akri (dragon) side.

They have a huge Jovian world, the gas giant is somewhat more massive than Jupiter so it can keep three large moons in orbit in Laplace resonance, like Io, Europa and Ganymede of Jupiter. The cheetaan live on the largest of these moons, which would be the equivalent of Europa.

Their sky is amazing at least the side facing the gas giant (the moons are tidally locked to it). In the spring and autumn equinoxes, they can watch many spectacular eclipses and shadow transits, and occasionally they might also see beautiful auroras not only on their sky, but also on the poles of the gas giant. Solar eclipses by the inner or the outer moon are rather common, a few almost always happen around the equinoxes. The rarest event is when they eclipse the inner moon in front of the gas giant, you may check such a partial eclipse in Celestia at 2021.01.10, 21:20 on Europa's surface.

The watery appearance is rather deceiving. It is late spring, nearing the summer solstice in a city sitting near the arctic circle (the planets and the sun are aligned accordingly on the picture). This time a lot of snow on the massive mountains around the pole melts, swelling all rivers, flooding the lowlands. To the beginning of the autumn these waters evaporate, and they face very dry winters. Their planet has a lot less water than Earth, they don't even have any oceans (only a few large saltwater lakes like the Caspian Sea).

Their world is on the inner edge of the habitable zone, as such, it is rather hot, that's why they live near the poles. Around the equator, more than two thirds of the planet is a completely uninhabitable desert. The north pole is inhabited by the cheetaan (that is the cheetah-shaped "nir", and the anthropomorphic wolf "xi"), while the south pole is where the wild dragons live as top predators of a largely different ecosystem. These races have quite complex relationships among each other and the planet itself, maintaining a delicate balance.

What about that tiger? It is a biological monument, similar to the rest sitting in the centers of their cities. All are capable to some degree of movement (at least the head and neck), some even more than that. They were crafted and grew by the nir, their ages are unknown, presumably standing since the cities came into existence. They serve as a vantage point and base for protecting the cities against wild dragons, but nirs and xis also frequently perform astronomic observations sitting on their head. As everything in the city, they are powered and fed by sapping the necessary resources from the plants around. Seven such giants exist in populous (this means about twenty thousands nirs and xis) cities, and several smaller ones in minor settlements.

This city along with most of the others is destroyed in the war breaking out between the cheetaan and the colonizing humans.