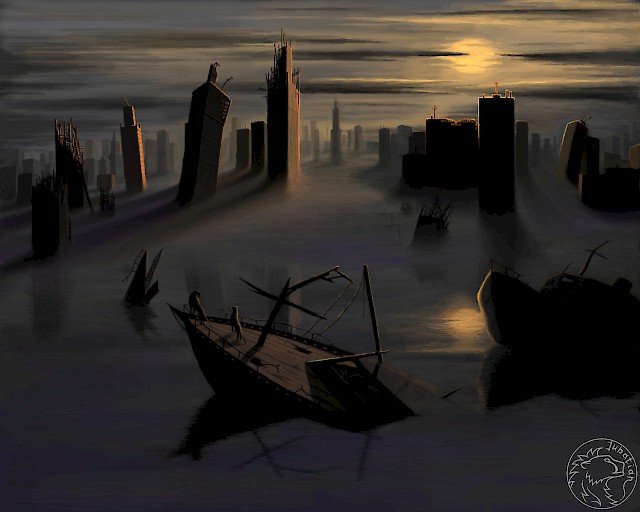 This large digital image was drawn for more than two months until it was completed (Or better to say I thought there is no much to do with it any more). It is one of my better pieces although it suffers some coloring problems (Some of these coming from that my computer's display has a very weird color space in the dark range which always makes me re-adjusting whatever I do).

The theme would be an abandoned city on Earth, with cheetaans wandering around seeking for the sunshine. This is a part of the "original" cheetaan story, that is the story of the first interstellar war between human and cheetaan.

The creatures although from distance resemble to Earth cheetahs for their similar size, coloring, and build, are fundamentally different from the Earth evolutionary paths. In short they operate with bio-electricity (Having no "real" blood), and their genetical evolution works completely differently that of Earth creatures', most notably by that it does not require the here fundamental birth-death cycle.

Human of course in this universe don't quite notice the importance of these, and goes in a war for the resources of their home lands. Oil, uranium or whatever can be burned, probably also for some unobtainium (Just joking). While human would be capable to initially overrun them, in the long run these will turn out terribly wrong resulting in a never really ending struggle escalating later to the situations would be portrayed in Cheetaan Legacy.

It is not just good and bad with human being here on the dark side. Human politics has it's motives, people has other, ending in many different factions. The "people" of cheetaan, although might feel for some more united and rightful in the wars, may also well turn dark trying to push through their "solutions" of the intergalactic problems.