The fourth November was the end of this year's season in Budapest Amusement Park, which also might have been the last day ever. In the past months it popped up several times that the park will close down, later denied, then surfacing again among the old plans of extending the zoo in it's place. So we with my sister and her friends gave it a go on this very last day! Of course the old Olympus C2500L camera also came to capture some of the feel of these moments. 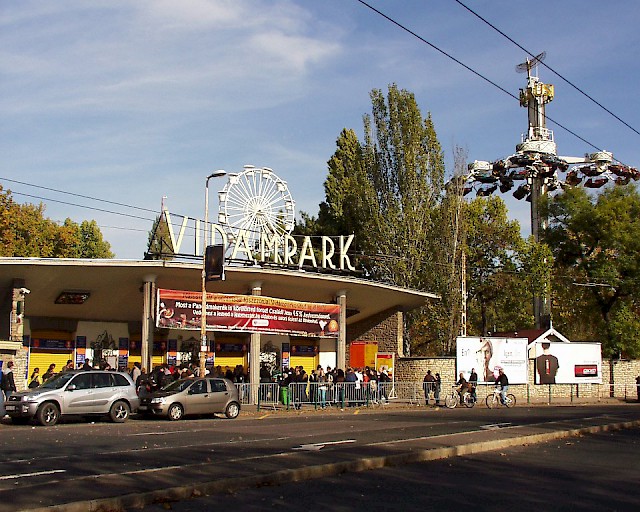 Waiting for opening at noon, the park was open till six o'clock

The park has a long history, even by it's name. Since 1950, it is called "Vidámpark" (meaning Amusement Park), but before, it was called "Angolpark" (English Park). For what reason, and when it was actually founded, I couldn't find. Probably it came to life with Budapest Zoo founded in 1866, as a part of the large "Városliget" (City Park) offering entertainment. Several of the rides pre-date the name change, such as the carousel (1906), the wooden roller coaster (1922), and as I heard the ride called "Kanyargó" was also opened in 1925. This, and some other attractions which were still operating can be seen on the 1960 video linked at the end of the article. Even if the park would finally close down, some are subjects for preservation, being planned to be kept operating within the zoo which is planned to acquire the area of the park. Then probably this will be the only zoo in the world having a big wooden roller coaster in it! 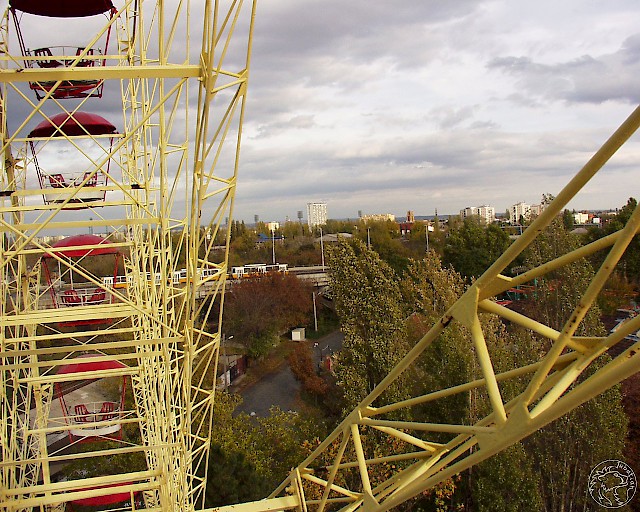 View from the iconic Ferris wheel of the park, towards east

The name change in the 50s also show up in the satire film "The Witness" (1969) by Péter Bacsó, where the decision was attributed to Comrade Pelikán. Well, then he also got to rename the Train of Spirits (Ghost train) to the Train of Socialist Spirit for a rather shocking experience for the dear high-ranked comrades of the Party coming for the protocol-visit.

Well, but let's enter the park! First ride to go was well, oh well, I seriously wanted the wooden coaster, but it was not operating. Let's try that small spinning coaster instead! Spinning, eh? No problem! Wheee!

Oh well, that was not bad, though I feel a bit dizzy now. What to try next? 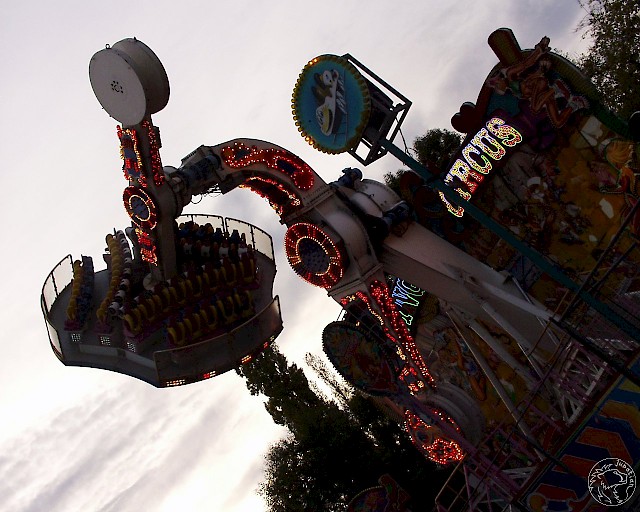 I guess I have a little problem with my stomach...

The Flying Circus is definitely a no-no, but let's see how an inverting swing swings! I had never been on such before! Hop on, fasten me good, and there it goes! A little up, then down. More up, and down! Oh, huh wheee, going up the skies! And roll over! Huh, that's definitely grave, the gravity of the centrifuge and the sidewalk is up above my head and getting away! That's dizzy, and the breakfast (how far away was that anyway, more than eight hours before already!) starts to think, well, that it is not sitting so conveniently in there. But behold, at last, the swing stops, right on the top! Whee, see you down, or up there!

Uh-oh, that's no good. Stuff survived the swing staying within, but drat, that's the end of the day. The bad part with this that no matter how I am spun, held upside-down or whatever, it is all fine with me, but not with my urges to storm to the bathroom to relieve myself from everything and more, and worse, this only gets to surface with it's full rage ten, twenty or so minutes after the ride.

Thankfully after a hour or so with almost puking myself on the ghost train (and not for the aforementioned socialist spirit), then nearly crapping out in a dodgem, it started to settle down somewhat. Good. Stay. Just photographing, and watching my sister and friends having fun with stuff (how one can go two rounds on that spinning coaster just to rush to Breakdance right out from the seat, it stuns me). But all that would be just too easy. 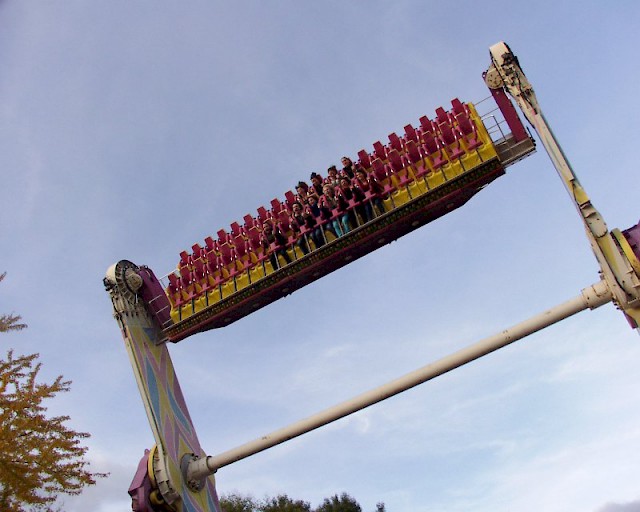 The Purple - looked scary, but after all, was a decent ride!

Uh, well. So it was near dusk, and the bunch decided that that big Top Swing they called "The Purple" was not that scary after all, so some of us tried it. I photographed unsuspecting. But then, well, yes, it was like two hours since the inverting swing, so I should definitely go on something, and drat, a few minutes later I found myself hopelessly strapped in the gondola of that purple nightmare!

It wasn't that bad after all. It would let us swing mostly free with doing a few complete circles. Apparently the gondola itself wasn't directly controlled, just locked in place to invert us by the swing, and in upside down positions it would let us go for some wild rolls! That was nice, completely losing controls, even my bloody stomach got to forget which direction it would like me to throw up - really! The finale of the attraction in the summer was slowly descending the swing face down over a pool with fountains. The pool was of course still there, giving me the thought: eh, how nice, now people can conveniently puke all they want, and won't mess their pants!

But thankfully it ended without relieving me from my breakfast. It was even a good ride after all! 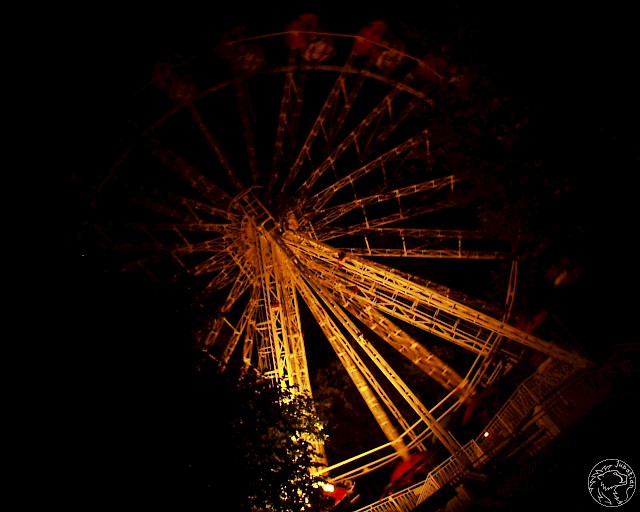 Night fell on us while we were wandering around in the Park, some trying some more intense rides, some of us just going around and sitting on just a few gentle things, well, after all, almost everything was free after the entrance. The Ferris Wheel gave a completely different experience this time, well, being once on the London Eye, no matter that it is larger, I still say I like more ours with the wind blowing free through it's architecture. That's a different climate and culture. I would miss these parts of the "East" with no plexiglas barriers and all. 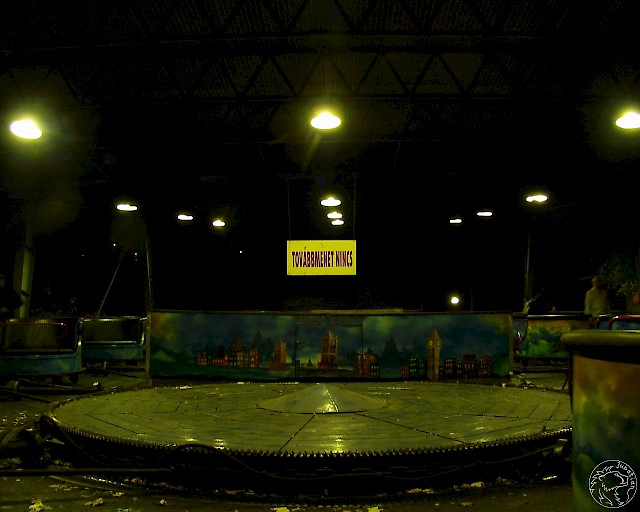 No reruns. Probably the fate of the park?

With the night, the park transformed for the last time this year, and probably ever to a wild light show. Ikarus towering above with red spinning cars, the Flying Circus with its large reflective disc, Breakdance and the "Polip" (Octopus) Dance with all their flashes drove us in a weird sensation in the slight rainfall which came. The final runs once came, the operator of the "Polip" inviting everyone for a last wild dance under the arms of the green octopus, bidding farewell for 2012, expecting us for the opening in 2013. But will that ever come? 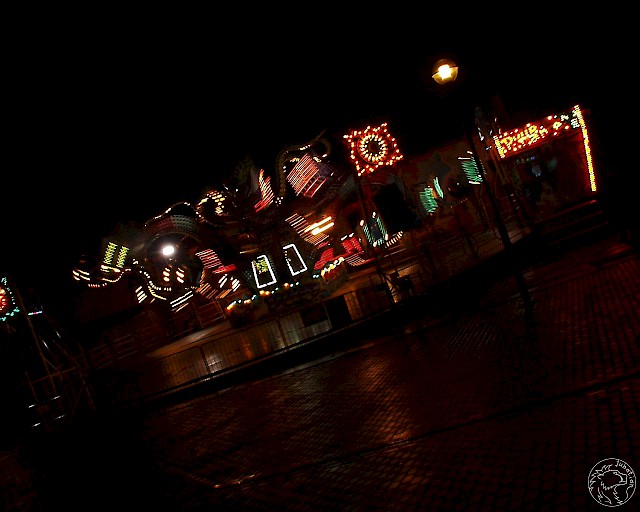 The final dance of the