What child's toys were like just a quarter century ago? Looking back it feels quite strange that how those all turned sort of history, all those things I had in my childhood still found in my room at my parent's. A short article comes so with some photographs on some notable pieces. 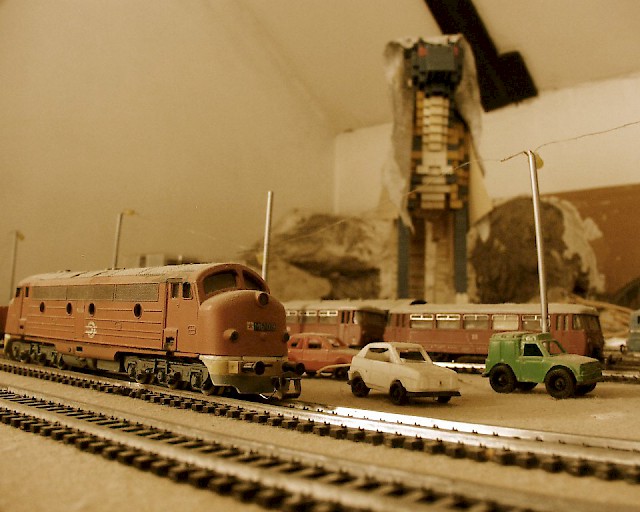 Arrival at Decaystation in the dust of a quarter century

This image packs quite an amount of history, not even just at toys. At the front a NoHAB locomotive might seem to move in across, but looking more closely, it's apparent that everything is covered by dust, the decay. These things are standing there still since at least eight years or probably even more. The trains are Tillig models (1/120), which were more affordable back then than the today more common H0 scale. Back then, but when? The U rails, and the old style coupler may give some clue, truly these are more than a quarter century old. I didn't mention the locomotive itself since it is common to release models from a past era - but this particular model was "current" when it was bought. These were manufactured in the GDR, and so the red five-pointed star faintly visible on the front of the loco is how the real thing looked like those days. It is interesting to note that this particular unit (M61-019) is still in service at track maintenance even though it is more than fifty years old. In total six remained operable from the twenty came to Hungary around 1960. As of today M61-001, M61-010, M61-017 and M61-020 have a paint job similar to the original, and M61-006 and M61-019 retained the orange exterior. The organization operating M61-010 also has M61-002 in inoperable condition. A third of the M61-004 locomotive also remained exposed in front of the Museum of Traffic which was originally planned to be preserved, but suffered a serious accident in 1998. Recently a private company also brought in a similar locomotive from Denmark which is referred to as M61-021.

Well, maybe that was even more on that locomotive than one would want to absorb all of a sudden, just for interest. So let's drift away a bit from trains, and take some deeper look at the image. You also see some little cars which fit well to the scale: These simple plastic things were manufactured in Hungary as far as an engraving on the bottom tells (Reading "Pici" which means "little", in Hungarian). These also came from before the system change, simple things, but maybe I am the only one having a few (four) of these to this day.

Looking even farther you would see lamp-posts, obviously some arcane hackery (the poles themselves are pencil ink tubes), and behind in the far is that huge shape of some dog - or cheetah (At least I intended it to resemble a cheetah). It's not of the Danish LEGO. It's from the GDR again, and it was called PeBe, a rather shoddy LEGO imitation for the socialist block. Shoddy, but I liked it a lot, actually even more than the real thing which I happened to get later! What was good about it? It was simple, and there were a lot of bricks. Just a few types, but in a huge box. No manuals came with them, it was even distributed in simple nylon sacks without any description. You were left to your imagination, and you missed nothing if the bricks eventually worn out and broke. Long trains, trucks, and even articulated buses (The "articulation" cut out and fold of paper) were some of the favourite subjects. Eventually the bricks started to need some handicap to stick together which quickly bred paper shreds in the box used for this purpose. I still remember how happy I was to get "back" a nice sack of "fine" quality bricks a day when my parents emptied the attic finding this pack of bricks discarded for sticking together too poorly (back then - not that they got any better, but compared to how I managed to wear these out, they felt fine new brick when found!). That cheetah is the last thing built, and probably will be ever built of PeBe, sometime around ten or more years ago. Another bricks from the wall vanished, came to be just a memory. 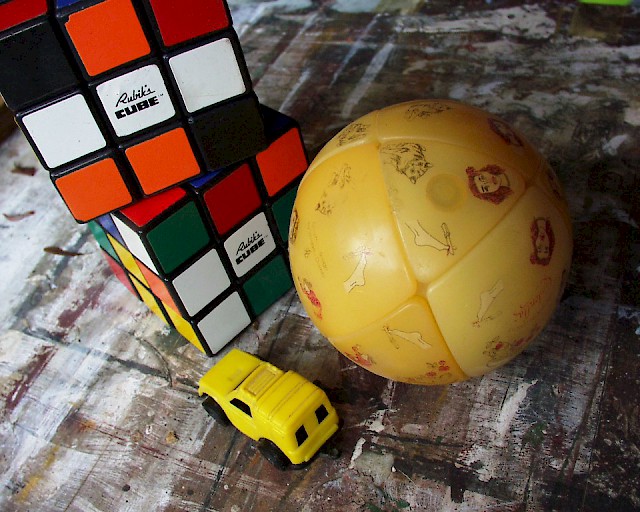 Ahh, the Rubik's cube, a well known Hungarian invention. But what about the rest? That little car was introduced above, this is also a member of that simple Hungarian manufactured plastic toy from before the change. The sphere with a similar construct like the cube portrays scenes from Cinderella. There is no age designation on this, but the designer's name is noted on it, and that's a Hungarian name. The sphere obviously was created long before Disney's interpretation came to be, the figures resemble to those used in an old children's book. 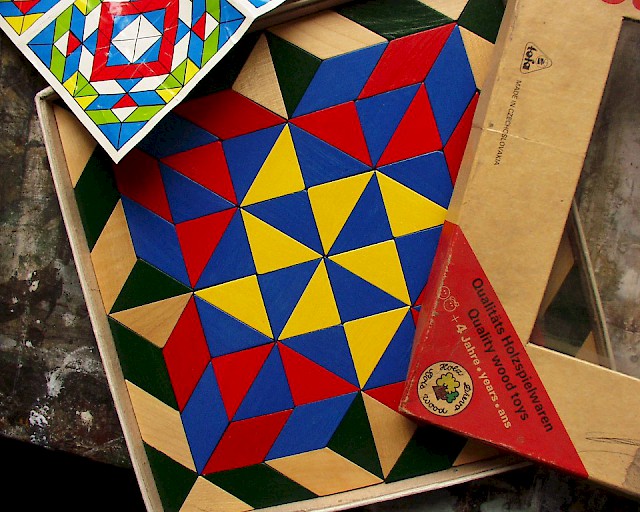 Mosaic blocks in prime conditions, like new! How this could end up here? Just look at the box, again, a country which ceased to exists in that form almost twenty years ago. The Czech Republic and Slovakia parted in 1993, then a few years later Yugoslavia followed with it's long agony. The tiles themselves are of very good quality with similarly fine paint work, there is not a single scratch on them: it just feels good to touch and pick these little tiles up. It is true though that this toy wasn't too much used, and was cared for even then, but still, it feels like a miracle that it didn't deteriorate just from the sheer age. It was mostly kept in a shaded place, well, after photographing, I put it back there hoping it will stay this way. 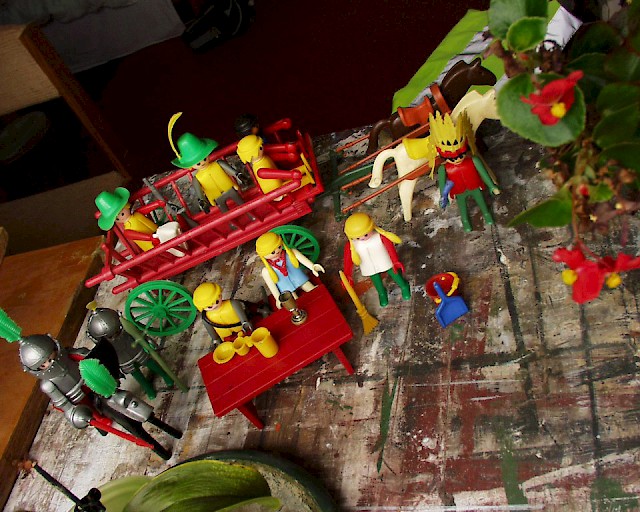 The origins of this set is largely unknown to me. I only remember that these came from a friend of the family who even had blocks for building complete forts, castles, and medieval cities for them, and that was way more than twenty years ago, certainly from the pre-change world. There is no origin or whatever designation on any of the pieces. It is interesting that the whole set is made of just plastic, no metal, neither painting is used (Except for the faces of the people). As far as I remember, this set was seldom used, but still, it broke and got worn, sometimes that being clearly apparent that for the not too fine quality of plastic. Otherwise it was designed so that most of the tools, guns, cups etc. can be put in the hands of the people, the saddles would fit on the horses, and in general everything what should go together feels properly designed. If only that poor quality plastic work hadn't ruin it mostly. 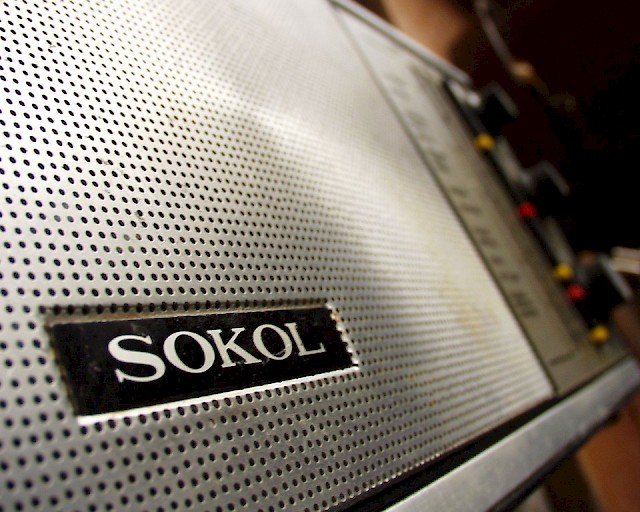 Finally not a toy, but also an interesting piece: A Sokol radio, model 308. This piece of electronic was one from those common in the system of the past, these in particular were manufactured in the 70s. I got this unit from my grandparents after the batteries rusted in it and they bought a modern radio. I removed the remnant of the batteries, cleaned it a bit, and soldered the MV and SW internal antennae to the unusable FM receiver's. Why this latter? It gave some very interesting nights. I would typically use a roll of wire, one end wrapped on the external antennae, and the other with the roll hung under the window: this way I got some very distant channels to select from in the SW range. I spent a lot of time listening some exotic musics I found turning the knobs of this radio operated from the model train transformer through a capacitor for regulation while reading and doing other stuff. It was also somewhat interesting to listen the blabbering of heaven knows which languages, well, all in all, it brought in something strange and extraordinary. I also like this old radio very much for it's sturdy elegance with all the metallic surfaces, and to tell the truth, even plastic from the soviet era feels largely different to that of today's equipments. All in all, something what marks that era, something today's products definitely lack. And that radio still operates, too bad slowly analog transmissions fade away giving up for digital rendering all these historical equipments just lumpy piles of old useless electronic.

Scary. Looking back, realizing how that the age I grew up in turned history, and how most of what was common then turned in dust leaving no memories. The bricks from the wall fell, but well, many many things faded away with them. Some for good, some we miss, that's the way how life goes on.