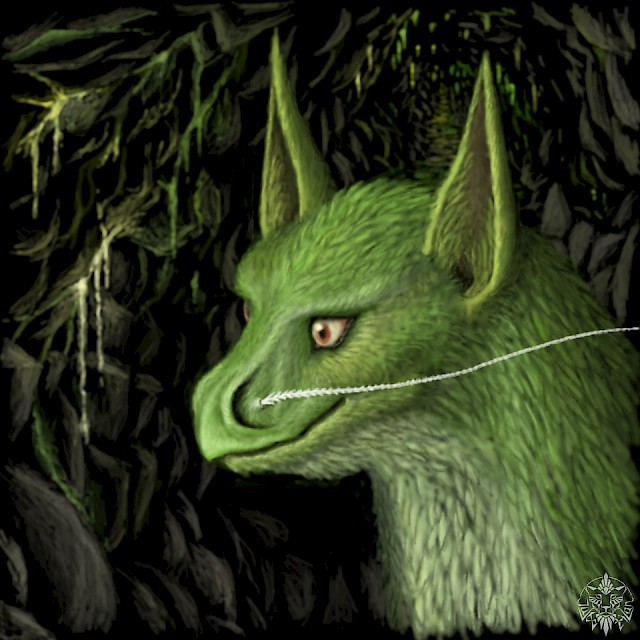 The product of some fast doodling (about 5 hours).

Their reputation along human, and the name "dragon" was earned by their ferocious nature, supplemented by their impulse laser in the throat serving as their devastating long range fire breath. In the interstellar wars even though in flight they couldn't keep up with human technology, they efficiently held against attacks as extremely mobile ground to air cannons.

The dragons however never allied with the two other tani (cheetaan) races. They kept on living on their own, attacking the cheetaan just like they held against the human assaults. While they are extremely powerful, they lack high intelligence, and so, never acted as a whole understanding the reasons and the possible consequences of the wars.

But how one would end up underground?

In the wars, the human race managed to occupy the majority of the land north of the equator deserts. They pushed out cheetaan from their territory in the wild, also conquering their cities. While many of them died, more survived either running from human or attempting to hide under the new rule.

Eventually to escape from the oppression, they, using their long known skills to form and inhabit caves, moved underground. Many decades later, far off the reach of human, they established large self-sustaining colonies in the depths.

Dragons appeared underground as the still standing cheetaan cities started to expand downwards. Those few tame dragons they had to protect their land, as human progressed, also went down with them.

Later as the cave systems expanded, past human borders, connecting with cheetaan refuge settlements under human cities, these dragons found a purpose. In the dark nights they could ascend from their hideouts in the most unexpected places for a devastating assault against their oppressors, just to vanish afterwards like they never existed leaving only destruction and sorrow behind.

These actions just worsened the reputation of the whole cheetaan race along human, altering the fantasies, the image of dragons, evil, and even that of hell. However the truth is, those under the surface of Earth never see the the sun, much less the lands as they always remembered them in their eternal life, so their desperate acts carry on.